The Blind Man Can See!

It was renewal day at my local Secretary of State’s office.  Yes, it was time to renew my drivers license.  It was the year I had to go in. No more mailing in the form with my check. In a few days I was to turn the big 5-0! I was already a bit uneasy about hitting such a milestone. Suddenly it was my turn. The lady wanted me to take their basic eye examination. “Just press your head firmly on the top and read the middle row”, she said. I pressed my forehead against the top headrest of the machine and looked into the little eye piece. As I tried to read the letters in the row things were pretty blurry. A, C, I started slowly, not quite sure if I was correct. Funny how the letters in a blurry focus can start looking alike. Take it slow I thought as I tried to concentrate. It was like my experience in taking tests of years gone by. Receiving the test, I tried to answer the questions I knew without thought. If I skipped the first five or six questions panic would set in. Maybe I don’t know any of them. After relaxing and going back over the questions suddenly the answers would come. Could the answers start coming on this test too?

I probably should have taken the hint that I would struggle. I remember years ago passing the eye exam for my license but feeling very fortunate. Thinking when I was done, man, this test isn’t easy. Feeling like five or six of my answers were good educated guesses. There was also the warning signals at home. Times my son would be telling me the breaking news on ESPN and being in total awe wondering where he got his information. “I was reading it at the bottom of the screen”, he said. Oh yes, it did look like something was scrolling down there. I also remember my troubles on the golf course. As if playing the game of golf was not hard enough, seeing the ball was getting almost laughable. I’d hit the ball and try to pick it up. Unfortunately I rarely did. I’d end up getting the person I was playing with to stand behind me as I hit. Ting, my driver would sound as it made contact with the ball. A quick look up and of course I saw nothing. Out of the corner of my eye I’d watch my friend and the direction his head would go. If he looked straight ahead it was a good sign. If he started looking to the left or right I knew my shot was in trouble. Talk about a sad way to play golf. I guess I didn’t mind so much not seeing the bad shots, but not seeing the few good ones I had was really disappointing. One time I hit a shot. It felt good and I think I caught a glimpse of it going toward the green. Of course I lost it soon after. My friend was telling me in great detail what had happened. “Your ball hit the rake that is standing up in the sand trap”, he told me. I was in doubt until we got up to my ball and I discovered the rake he was talking about and my ball nestled nearby. I remember hitting balls solid and the quick glance to my partner behind me. His head was looking straight ahead! “Nice shot”, he’d say. If the hole was a par 3 walking up and seeing my ball on the green was somewhat of a thrill. How I wished I had seen the flight of the ball!

I guess I always took pride in not wearing glasses. I’d hear compliments like “wow, you mean you have never worn glasses”?
“Nope, never” I’d say feeling good about myself like I was a conquering hero. My sister needed glasses at a young age and some of my good friends did too. Back then glasses were not made for appearance. The black rims with the big lens were the order of the day. Kids were extremely cruel to other kids wearing glasses it seemed. The term four eyes was used constantly. Luckily for me my eyes were very good back then. I passed eye tests with flying colors numerous times. I took pride in the fact I didn’t need glasses! No four eyes for me!

The eye test was not getting easier. If anything, it was getting harder. Somehow a miracle of miracles happened. I actually got 4 in a row right! After that it was all downhill and I think I missed 5 or 6 in a row. “No, No, No”, the examiner was saying. Shaking her head as she checked a box and wrote on my card. The box she checked was a request for an eye exam. She explained that I would need to see an eye doctor before I could take the test again. Just like that it was over, I had failed.

Feeling horribly depressed I called an eye doctor’s office and was lucky enough to get an appointment that very day! “So, I hear you didn’t pass the eye exam for your drivers license eh? Well, let’s just take a look and see what the problem is”. It was the doctor in his white smock. He was a very friendly man with what I perceived a very helpful spirit. After putting me through extensive testing and asking me tons of questions about which view is clearer he was almost done. It was amazing to me how he made my vision so good by just making switches in lenses on his eye machine he had me looking through. The last thing he did was dilate my eyes so he could look in back of them. Everything looked fine and the order for my new glasses was issued.

About a week later I received a call, my glasses were in! The doctor warned me when I picked up the glasses that it will be a little strange for awhile because I needed a bifocal lens also. He said that while working on the computer it would probably be better to not use the glasses. My real problem was with longer distances. “A little strange” wasn’t strong enough to describe how I felt when I first put those glasses on. Although my vision seemed much more clearer my equilibrium was almost non existent. I felt like I was on a hill and if I stepped I’d fall off. I walked very carefully out of his office. Negotiating the stairs was a major challenge. Luckily I made it in one piece without falling. I felt like I was learning to walk all over again!

Driving around with my new glasses on was an amazing experience! I had accepted my bad vision as the way it was supposed to be. Now I was seeing signs from a quarter of a mile away and reading them! Those same signs would only have been read within 40 or 50 feet without the glasses. I was so amazed with my “new vision”! I couldn’t believe how much of the world I had been missing. It reminded me of The Wizard of Oz when they went from black and white to color! With my new glasses on I easily passed the drivers license eye exam. I was reading every line and could read the fine print too!

With my new glasses I wasn’t having any trouble seeing my golf ball. I’m sure I could have seen 250 yard drives now! Unfortunately I was almost missing the ball. Constantly the ball was coming off the heel of the club. Finally after about 3 holes of this I took the glasses off and my game quickly improved. Back to “please stand behind me when I hit this”. I noticed the same thing in softball. Although I could see clearer with the glasses, my depth perception was way off. I decided to wear the glasses for an hour or two a day and get used to them gradually. After awhile my steps became steadier and my depth perception began improving.

Funny how things change through the years. When a company wants to portray a smart person in their advertisements that person is usually wearing glasses! I’ve noticed investment firms using the glasses look to portray braininess! I guess the thinking is that those people did so much reading that naturally it had a negative effect on their eyes! The knowledge that they had stored though had to be enormous!

Now I’m comfortable doing everything with my glasses on! When I golf, play basketball or softball I wouldn’t think of not wearing my glasses! I see so much clearer and now that my eyes have adjusted to them, I sometimes forget I have them on! I realize that it was just silly pride that kept me from seeing clearly all of those years. In the spiritual realm silly pride can keep us from seeing clearly too. We get to a point where we are accustomed to our blurry vision and assume that it is how it’s supposed to be. When we humble ourselves and seek his guidance, God will open our eyes to a whole new way of living, thinking and seeing! The song Amazing Grace says “was blind, but now I see”. Of course it is talking about the difference between life without God and life with him. However, they say that a picture is worth a thousand words. As I drive around in my car with my glasses on, sometimes I’ll raise the glasses and try to read the signs without them. I’ll see all of the blurred letters and the clouded images. Then I slide the glasses back over my eyes. Clear and crisp as a crystal from a great distance away! What a difference! I’m reminded where I was and where I am! The meaning of that songs lyrics seem so much clearer now! 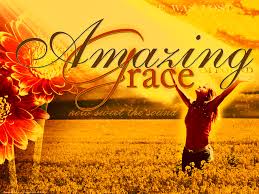 5 thoughts on “The Blind Man Can See!”