Naturally our eyes are attracted to the colored picture and the headlines!  What headlines they are too bordering on the bizarre to the unexpected!  It’s the grocery checkout line and while we are waiting as someone in front of us has 100 items to run past the cashier there they are.  It may be the National Enquirer, Star Magazine, The Sun, Globe, or The Weekly World News.  The store knows we may be waiting for awhile.  The magazines and mini newspapers are placed right there at the checkout lane.  They make them so tempting to pick up.  The main story is on the front but usually we have to dig through the paper to find it.  Within that digging there is a lot of other stories that catch our eye.

I remember years ago one of the tabloid papers ran a story that John F. Kennedy was alive for quite some time after November 22, 1963.  The story even had a fuzzy picture of a person with a bandaged up head in a wheelchair.  Supposedly it was from some far away island .  I’m sure that there are some who believed the story.   It’s a story that is so bizarre that you want to read it even though you know it isn’t true.  Deep down you hope that some miracle happened and it is.  Life doesn’t seem fair sometimes and we root for the stories we would like to be true.

I remember watching a concert highlight of what it was like to be at an Elvis Presley Concert.  Elvis put on a fantastic show singing all of his hits and performing like the icon that he was.  When he sang his last tune he left the stage.  The audience was in an uproar.  “We want Elvis, We want Elvis” the cries went up.  After several minutes of this the announcer came on the P.A. system.  “ladies and gentlemen” he said over the crowd noise, “Elvis has left the building.”

When Elvis Presley died in 1977 the world was in shock.  Elvis was an icon as he was  the king of rock and roll.  Nobody wanted to believe that the unthinkable had happened to him.  Somehow they had to accept that their idol and someone who they almost considered family had been taken away.

I think it was during the 1980’s that a story came out in one of the tabloids.  The story stated that Elvis was alive.  He was seen in Kalamazoo Michigan at a Burger King.  He was reported to be seen at other places too, but Burger King seemed to fit.  Living in Kalamazoo I was seeing businesses running with the idea.  One of the local Burger Kings had on their sign “Elvis eats here”.  I think a local spa had a sign that read “Elvis works out here”.  Nobody mentioned that a couple of whoppers at Burger King probably wasn’t the recommended food for spa members.  There must have been an Elvis impersonator going around in our town as many people claimed they saw him at businesses throughout the city. 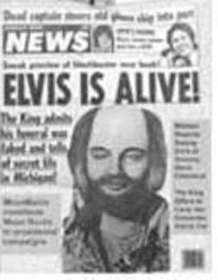 The publicity was great for Kalamazoo and seeing those signs brought smiles to our faces!

Elvis was such an icon that it didn’t seem fair that he was struck down at only 42.  A book came out about Elvis being alive that listed reasons why we should believe.  The story was that he faked his own death.  One of the supposed clues to this story was that his middle name was misspelled on his tombstone.  It doesn’t take much to give people hope.  There were millions of people who held out hope that these stories were true.  Years later a story came out that Elvis was dead at 58.  It seems like he lived his life from 42-58 quietly and gave people the impression that he did it to get out of the spotlight.  So for the Elvis fans (and there were million’s) there was hope that Elvis was happy in his years after fame.  That he lived a quiet life and enjoyed himself.  Isn’t it strange how we can be willing to believe a lie if we want it to be true?

Through the years I have seen hundreds of headlines in these tabloids at the checkout lines.  I’m sure that many border on telling the truth though a few untruths have to be mixed in to make it interesting.  Stories especially about movie stars or famous people are sure to get attention.  Stories about bizarre happenings turn heads too.  Anything concerning aliens, UFO’s, a person weighing 1,000 pounds or  one nine feet tall will be read because of curiosity.  I guess they create excitement and information that we need to explore.

Seeing how easy it can be to be deceived in the grocery line with only tabloid papers at work, how much easier will it be to be deceived when we hear things on the radio and TV?  How much more convincing will these stories be when all of the media have the same facts and figures?  How much truer will everything appear when a trip to the internet will give us all of the details?

One day the disciples asked him privately, “What will be the signs of your coming and the end of the age?”  Jesus answered, “Watch out that no one deceives you.  For many will come in my name, claiming, I am the Christ, and will deceive many.” Matthew 24:3-5.  In verses 23 and 24 of the same chapter Jesus said “At that time if anyone says to you, “Look, here is the Christ! or, There he is! do not believe it.  For false Christs and false prophets will appear and perform great signs and miracles to deceive even the elect-if that were possible.”

It’s easy to want to believe something especially if it seems good.  God gave all of us a free will.  We can choose what we believe.  Remember the game show “Let’s Make A Deal?”  I would try to play along and pick the curtain over the box.  Sometimes it worked out and there was a good prize there.  Other times even though the curtain had a lot of space for a fantastic prize it was a zonk.  That was a prize nobody wanted like 3 pigs.  On the other hand the box which was very small might have a sign that said $5,000.  I’d shake my head wondering how I could so easily have been deceived? It was like the deception in the grocery line.  Getting involved in a story and wishing it were true.  It was like reading a tabloid that Elvis was still here and not facing the reality that he has already left the building.

Posted in Lessons From TV Shows, My Learning Experiences