Getting Past The Cover

Years ago we had a big kid that we invited to play softball on our team.  He was a body builder and his muscles bulged from his arms and chest in a powerful appearance!  In fact he looked like a slightly smaller version of Arnold Schwartzennegger!  We figured that surely he would be hitting home runs at a rapid pace!  Our opponents saw the big guy coming up and positioned their outfield way back by the home run fence.  Unfortunately the correlation of his massive body muscles and his ability to hit the softball did not match.  The fact was he had a hard time getting the ball out of the infield.  His hits were bloopers just over the infield that dropped into the outfield as the fearful outfielders desperately ran in to no avail.  After awhile the big guy quit the team out of embarrassment and I believe a pulled muscle. 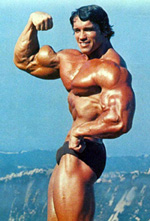 If you look at an early picture of the company listed below you probably wouldn’t be impressed.  The order of the day in the corporate world was more of a clean cut sharp suit image.  Yet here was this renegade company with a different look competing for our business.  Looking back we all wish we would have invested in their company back then.  We all have to admit though that it would have been hard to get past the cover of the book and into the real contents. 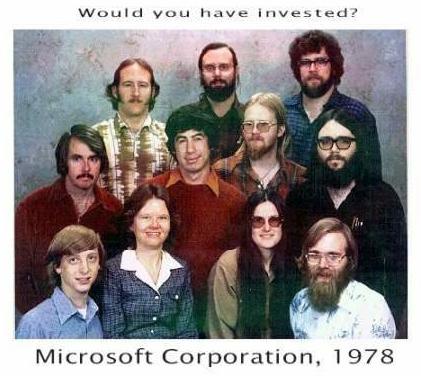 Would you have invested with this company?

Today the Microsoft Corporation is worth over 230 billion dollars!  Yet if you went on the “book cover” for the young company in 1978 I doubt you would have trusted them with your money.  Needless to say things are not always as they appear.  Sometimes our sight can deceive us if we are looking at appearance without the willingness to dig into the book!  Sometimes we miss golden opportunities to read fascinating books because the cover is not fancy.  Other times we are very disappointed because the contents of the book do not match the wonderful promises that the cover provides.   Pictured on the bottom left is a young Bill Gates.  Who would have dreamed of the future fame he would obtain from this very humble picture?

Sitka Alaska is the hometown of Brent Cunningham.  Brent is a Young Life Director there.  To say that Sitka Alaska is a place that nothing much happens is probably an understatement.  It is a waterlocked fishing town with a couple of fisheries and a refueling port for cruise ships.  A standard reaction to Brent showing up at the Boston Marathon would be “What is a man from Sitka, Alaska doing at the Boston Marathon?”

The start of the Boston Marathon

Brent had tried to qualify twice for the Boston Marathon without success.  On his third try he barely got in under the qualifying time wire! There Brent was though in the midst of a gigantic crowd at the start of the Boston Marathon.  Sandwiched between tons of people from all over the world!  Little did Brent or anyone know the unexpected events that awaited them.  He did know that he was finally going to live his dream of competing in the Boston Marathon!  What a thrill it would be if he could finish after his disappointments of the past!  How great would it feel to show his friends back home the finishers award that comes to so few.  Brent ran his race that day and received his medal for finishing!  He was proudly wearing his medal around his neck and walking back to the hotel with his wife when the bombs went off.  Moments later they came across a young woman runner named Laura Wellington who was sitting by the curb crying maybe a half a mile from the finish line.  The race officials had stopped the race and Laura had just gotten word that her family was safe as they were up by the finish line.  Brent and his wife gave Laura comfort with kind words and placed a blanket on her shoulders to keep her warm.  As they got up to leave Brent asked Laura if she had finished the race?  “No” was her reply.  Feeling how disheartened she must have felt and knowing how much the medal meant to him for finishing, he slowly took it off of his neck and placed it on hers!  Names were never exchanged as Brent gave his gift without the thought of how much he would miss the precious reminder of his great accomplishment.   Quickly he and his wife walked away.  If it wasn’t for the vast social media networks we have today we never would have heard this story.  Laura was determined though to find this person who was so kind to her and she did!  Brent didn’t do his deed of kindness for recognition.  He did it for no other reason than to make Laura feel good!

The odd conclusion to the story is that Laura ended up with a medal for finishing a race that she didn’t finish and Brent doesn’t have a medal for finishing even though he did.  Once again we can’t judge a book by it’s cover can we?  As the Bible states “man looks at the outside, but God looks at the heart.”  It would also be true to say that man looks at possessions as things that you should store away but God looks at them as something to give to others.  When God looks at what we possess it has nothing to do with money or things, but attitude.  He cuts through what we look like or what other people see us as.  He reads the whole book that starts with what we do and why we do it.  He takes notes to reward people later who unselfishly give of their time and possessions to make someone elses life better.  You could say that man looks at the book cover but God looks at the contents!  Man looks at a persons social status, what their profession is, where they come from, and what their parents do.  God looks at all of us individually.  It is all the same to God whether we are from New York City or Sitka, Alaska, whether we are a doctor or a garbage man.  I’m pretty sure that when Laura looks at that medal she see’s Brents face and thinks about the love he shared that day.  I’m also pretty sure that Brent doesn’t miss the medal he had because God has replaced it with an inner peace that you can read in the contents of his book!

3 thoughts on “Getting Past The Cover”