David Brown had the ball in his hands.  The shot clock was winding down and he was way back behind the three point line.  The game was down to it’s last 35 seconds. It was in overtime and Western Michigan Brown’s team was up by two points.  This was the semi-final game of the MAC Tournament.  The winner would earn the right to play in the championship game.  Brown and his teammates had a dismal first half scoring just 17 points.  Brown Western’s leading scorer had only one basket in seven attempts.  His shot just seemed to be off the whole half.  Akron on the other hand couldn’t seem to miss and had a 34-17 lead.  Hope among the fans was dwindling as the Broncos took the floor for the second half.  In the second half the Broncos seemed to be playing with renewed energy, but every time they made a run Akron had an answer.  With around eight minutes left the unexpected started to happen.  It started slowly at first but that 17 point lead started to lessen.  They got it down to 11, then 9 and all of the sudden the Broncos had the lead!  Western had scored 18 straight points! Amazingly David Brown didn’t score any of the points in that stretch.  It was like the team was picking up their leading scorer and saying “don’t worry David, we got this!” They were picking up a fallen teammate much like their military training session before the season told them to do!  Coach Steve Hawkins had talked about overcoming Akron’s big lead at half time.  One possession at a time had been his motto the whole year.  Or as he so aptly put it “next possession.”  It means that the past is over and the present is what we need to concentrate on.  The goal was to keep chipping away and get back in the game.  Somehow Akron fought back and tied the game and sent it into overtime.

Coach Hawkins ends his interviews these days by saying the words “Fight On!”  These are words that one of his star players David Brown has been doing for the last four years!  Brown who has been in the program for five years now missed most of two.  After going almost injury free in his freshman season, he played the first nine games as a sophomore before a  severely sprained ankle forced him to take a medical red shirt for the remainder of the season.  He had high hopes coming into the next season as his ankle was healed.  Watching the teams tenth game from the stands I remember Brown landing funny underneath the basket and stretched out wreathing in pain.  At first there was hope that his right knee that was damaged was a sprain or a slight tear.  Unfortunately that wasn’t the case.  I happened to be by the locker room door after a game.  Brown saw and recognized me as a familiar face.  I didn’t expect it but he gave me a hug and told me he was out for the season.  He said that he tore his ACL.  He wasn’t in tears but I could tell he was pretty shook up.

Before I saw Brown he had a little time to gather himself.   When he first found out the news he  recalled his initial shock.  “It was the worst feeling of my life”, he told the press.  “I felt weak.”  Just as heartbreaking for him was calling his mother and hearing her cry on the other end.  Devastated after yet another year missed Brown had surgery to repair his knee.  After that it was continuous rehabbing.  By his side was his mother who was his inspiration, friend, and counselor.  “If it wasn’t for her I never would be back here.”, Brown said recently.

The next basketball season Brown wasn’t quite ready.  It wasn’t until January that he played his first game.  Coach Hawkins decided that Brown could help the team best as a 6th man off of the bench.  Brown flourished in that role and for once he got through the season intact.  Brown was named the 6th man of the year in the Mid American Conference!  The team had a good year and won two games in the CBI post season basketball tournament!

Although Brown was very successful as a 6th man he wanted to have a bigger role on the team his senior year.  Before the season a group specializing in “Military Training” was hired to help the Bronco’s!  Their theme was the “Fight On” motto that the team adopted.  The training tools were odd and unique.  They carried 50 pound sand bags, ran carrying a teammate on their backs, and took a sweat shirt off while in deep water among other things.  The director stated that if you were not a strong swimmer it didn’t matter.  A teammate would be there for them.  If they were a strong swimmer it didn’t matter.  They were a basketball team, not a swimming team.  The whole idea of “The Program”, as it was called was to toughen up the team by putting them through adversities and having them work together to overcome them.  It was an exercise in toughness and something to get the rest of the team up to David Brown’s toughness level. 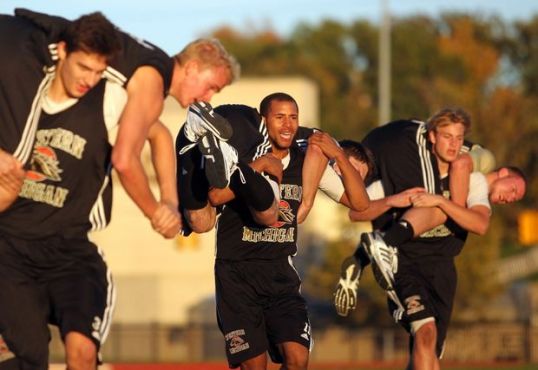 Military training for the Broncos Fight On!

In a marathon season there are bound to be up times and down times.  The Bronco’s season was no exception.  They were only picked before the season to finish 3rd in their division but they overcame all odds and tied for first.  Late in the season they played Toledo and a win at Toledo would have almost guaranteed an outright division title.  The Broncos led the whole game and were up by 12 with three minutes to go when the wheels came off.  Toledo put on a full court press and the befuddled Broncos did everything wrong.  If they weren’t throwing the ball out of bounds they were traveling.  One time one of their players couldn’t find anyone to throw his pass to from out of bounds.  After a long search he spotted a teammate under the basket for a sure score.  Before he could pass the ball the referee’s whistle blew.  It was a 5 second call and another lost possession.  With each Bronco mistake came a Toledo score.  Before they knew what hit them Toledo had tied the game and actually went ahead.  Only two free throws by the Broncos sent the game into overtime.  Unfortunately Toledo’s momentum took over in the overtime session and they won the battle.  Western was heartbroken to come so close and Coach Hawkins was disheartened but reiterated that “there was no time to hang our heads” when he talked on the post game show.

The regular season ended with the Broncos tied with Toledo as they shared the division championship.  Western would only have to play two games at most in the conference tournament.  The first one was against Akron.  On the way to the Quicken Loans Arena in Cleveland adversity showed it’s ugly head again.  A major accident occurred on an Ohio Turnpike making their 4 hour trip an 11 hour affair.  It can’t be easy for tall players to be scrunched in a bus for 11 hours but that was the Bronco’s fate and another obstacle to overcome.

So the clock is ticking down and with around 35 seconds left way behind the 3 point line David Brown jumped up and lets the shot go.  The ball was rotating beautifully as it does when the shooting form is good.  End over end in a nice back spin toward the basket.  Instead of dropping in the basket though his shot kept going and hit the backboard.  In a split second it caromed into the basket!  Anyone who ever has shot a basketball knew that Brown was not aiming at the backboard.  The old saying goes “he couldn’t hit the broad side of a barn.”  Apparently he connected with a piece of the barn this time which was the backboard!  After he made the shot Brown had his palms up in the air and seemed to look up.  He later said it was a blessing from above!  Akron never recovered from that shot! Brown scored all of Western’s 9 points in the overtime period.  It was like “thank you teammates for holding me up, I got this now!”  Shortly afterward the game ended in a 64-60 victory! 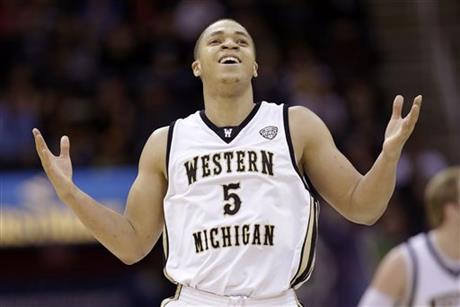 The title game was against Western’s old nemesis Toledo.  Western took a small lead but Toledo battled back to trail by only 2 at halftime.  In the second half Western started to pull away.  David Brown was a scoring machine with 5 clutch 3 point shots!  He had 32 points.  With about 3 minutes left Toledo was down double digits.  On the pregame show Coach Hawkins said that they had practiced their full court press offense.  “If that situation comes up again I think we will be ready!”  Ready they were as the Bronco’s repeatedly broke Toledo’s press for easy baskets!  With less than a minute to go and the outcome no longer in doubt Coach Hawkins emptied his bench and let some of the players who didn’t play much get some action!  Hugging each other on the sidelines was the Western starting unit who had overcome adversity and made their fans proud! In the middle of that group was David Brown who had overcome the most of all!

At the awards presentation there was nobody happier than Brown.  He had been voted the most valuable player of the tournament!  I’m sure he was thinking of all of the trials he had been through that made this moment extra sweet! He had the championship trophy in his hands and he was hugging it like it meant everything.  In that moment to David Brown it did!  I watched Brown sing the fight song along with all of the others.  While his teammates seemed to know all of the words David just knew the beginning “Fight on fight on for Western!”  I suppose that is because those words exemplified what he was doing the last four years.  There are many who don’t give Western Michigan a chance in their upcoming battle with Syracuse in the NCAA Tournament.  “It would take a miracle”, many say.  Perhaps it will be one more miracle in the David Brown and Western Michigan story!   It’s true that we over rate athletics in our society.  However I believe that we can learn valuable lessons from sports.  Sometimes in life we feel beaten down.  We feel that we can’t go on. This story shows that with faith, hope, and love all things are possible.  If you don’t believe it just ask David Brown!   FIGHT ON! 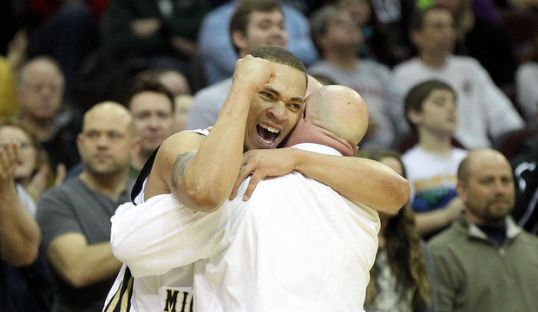 Brown and Coach Hawkins…We did it!