The cab pulled into our driveway and I went out the front door to meet it.  I was eleven years old and dressed in my full baseball uniform.  My uniform was a baby blue with yellow lettering, stirrups, and a hat much like the yellow color of the cab.  This was the first time I had ever ridden in a cab.  Even the circumstances were unusual but very thoughtful.  You see my dad was working again.  He was on the swing shift and here I was without a ride to my game.  I had wanted to play Little League again after a year off because of the ride issue.  I think I talked dad into the fact that somehow I would get a ride when he couldn’t take me.  Usually that turned out to be the case but on this particular night no ride was available.  That is when my loving mom stepped in.  She knew how much I wanted to be at my game and the only way for her to get me there was the yellow cab now sitting in our driveway. 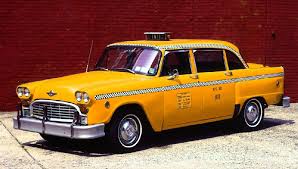 Growing up we were always playing some kind of ball games in our neighborhood.  It was so different than it is today.  Today everything is organized and grownups are involved.  We played games amongst ourselves and used our imaginations too!  We played Wiffleball a lot usually in someone’s backyard.  It was a two person game and it was only hitting, not running.  Each person would choose a professional team and each at bat you would call out who was batting.  For instance the Detroit Tigers were always chosen by one or the other.  When you announced a particular player now batting you tried your best to duplicate their batting stance.  The Tigers at that time had a player named Dick McAuliffe.  He had the most unusual batting stance maybe of all time.  He was a left handed batter but he had an extremely opened stance as he was turned completely facing the pitcher.  His bat was not back like most players positioned it.  His arms were stiff and the bat was extended way out away from his body.  Naturally he was the most fun player to mimic because it was so exaggerated that everyone knew who it was.  As unnatural as it seemed for McAuliffe it became natural.  Years later someone asked him why he used such an extreme stance?  “When I first went to the minor leagues”, McAuliffe stated “I was hitting everything to the left side.  The coach had me open up my stance to help me hit to all fields.”  With that extreme batting stance McAuliffe was very successful and played a number of very productive years!

The rules have changed countless times in the game of basketball over the years.  One thing that hasn’t changed however is the free throw.  The distance is still 15 feet from the basket and the player is shooting unopposed.  They call the line “the charity stripe”, but many playing the game are not good at taking charity.  Early on Rick Barry’s father knowing the importance of making free throws taught his son the underhand approach.  For years Barry was the only one in professional basketball shooting his free throws that way.  Barry recalled his first game of shooting free throws underhand at the high school level.  From the stands he heard a voice “hey Barry, you are shooting like a sissy!”  Another voice piped in from the man sitting next to the original.  “What are you complaining about?  He doesn’t miss!”  When Barry contemplated how unusual and weird his form was his father had words of wisdom.  “Nobody will make fun of you as long as you are making them!”  Barry was the best free throw shooter of his time in the NBA!  He shot 90% for his career!  He once made 60 free throws in a row!  Nobody laughs at how unusual Barry’s free throws looked.  They only marvel about his uncanny accuracy!

I think as Christians we can fall in love with traditions and the way things are “supposed” to be.  God made us all different with different talents and abilities so it doesn’t make sense that everyone’s ministry would look the same.  Dick McAuliffe’s unusual batting stance ended up not so unusual at all.  You see McAuliffe’s stance changed as the pitch was coming and he was striding into the ball.  His bat came back into more of a typical position and his weight shifted much like the technique all successful hitters employ.  The difference was not in the fundamentals but how he got there.  Maybe someone is doing something different in their ministry to attract people for God.  The bottom line should always be “Do they preach the fundamentals of the virgin birth, resurrection, and saved by grace?  If the answer is yes then it is just a matter of the fisherman using the proper lure to attract certain types of fish!

I got into the cab and we were off for the field.  My mom gave me enough money to cover the cab fare I hoped, but sitting in the backseat I noticed that the meter ran pretty fast.  I had a plan in my head for when we got to the field.  As an eleven year old I was very sensitive to what people thought about me.  I was concerned that if they saw me getting out of the cab they would have fun with it at my expense.  I thought if he just drops me off at the beginning of the entrance I could walk up to the field undetected.  As we pulled in I said “This is fine”, but the cab driver kept going.  He drove right up in front of the field and dropped me off.  Unfortunately it was right in the middle of my team and everyone’s head turned.  The cab stopped and I paid the driver and made my exit.  There was stirring from my team and one teammate in particular kept asking “How was the ride?”  It was the attention that I didn’t want.  As an eleven year old kid I just wanted to blend in and now I was standing out.

Even though there were grownups there too such as my coach and the other parents it was only the kids on my team that gave me a hard time.  The more mature people knew that the important thing was that I was there, not how I got there.  It’s the same way with your ministry if it is unusual in any way.  It’s not going to be the mature Christians who ridicule you, it will be the ones that don’t understand that God works in many different ways!  Rick Barry did not look like everyone else as he shot those free throws, but he shot an amazing percentage!

As an eleven year old the question “How was the ride?” almost was too much to bare.  If only I had the experience and wisdom that I have now!  I would say “You mean you rode with your parents? How boring is that?”  “You missed something special..That cab had massaging heated seats and a place to soak my tired feet.”  OK I might not have turned it around quite that much but you get the idea.  They would have admired me for withstanding their ridicule much like I admire to this day people who step out in faith and do something special and unusual for God’s glory!

Posted in Doing it Differently

One thought on “An Unusual Cab Ride!”