They say that one mans junk is another mans treasure.  From watching the show American Pickers I’ve learned that one mans treasure can be another mans treasure too.  I’ve also seen cases where one mans forgotten treasure is dug out (much like digging for buried treasure!) American Pickers is a Reality TV show.  It’s concept was started by Mike Wolfe.  Mike explains his love for finding treasures like this.  “When I was five, I had my first big score when I found a pile of old bicycles in my neighborhood trash one day.  And I was always bringing home old bottles and other random stuff.  I never thought of it as junk, to me, it was beautiful.”

When Mike was in his twenties he raced bicycles competitively which led to him opening a bicycle store and repair shop in his hometown of Bettendorf, Iowa.  At that time people were always telling him about vintage bikes for sale which he would buy and flip for extra cash.  Later he expanded the idea buying Italian scooters and motorcycles.  Finding treasures became more than just a hobby, so he closed his bicycle shop, bought a van and started a new business called Antique Archeology.  Mike considers his job truly amazing as he gets to find treasures from all over the country and meet amazing people with stories to tell about them!

The reality show “American Pickers” stars Mike and Frank Fritz (Mike calls him Frankie who owns his own shop up the river in Savanna, Illinois.)  Danielle Colby-Cushman works in Mike’s business in Le Claire, Iowa and later a second location in Nashville, TN. Danielle gives Mike and Frank leads as they travel to different locations throughout the country.  Danielle handles the business while Mike is gone and we see people coming into the store and her duties too.  This gives a good perspective of the entire business as Mike and Frank are always followed in a Mercedes Sprinter van and later in a Ford Transit searching for treasures.

Danielle holding down the fort!

Sometimes when they are out and about without a lead Mike and Frankie do something they call “free styling.”  After introducing themselves to an unsuspecting person answering the door Mike or Frank shake their hand. “We’re pickers”, one of them will offer.  They then give the person a list of things they might be interested in.  Usually they pick places that look like they have an over abundance of things in their yard for free styling opportunities. There are times that these “cold calls” work just as well as the appointments Danielle is able to set up.  They end up searching barns, sheds, or yards of collectors, hoarders, and occasionally people who have inherited overwhelming collections of what they might see as junk.  Opportunities to unload some of their items and make some money appeal to many that are on Mike and Frankie’s path.

To be honest I have become interested in the show only in maybe the last year.  Running through the TV channels I’d see “American Pickers” listed on the guide but never took the time to see what it was about.  “Pickers” are people that go through other peoples stuff and find things that are valuable to them.  Things they don’t pick aren’t necessarily not valuable.  Sometimes Mike and Frankie pass on something valuable because either it is too expensive or it doesn’t fit into what they like to buy.  That being said Mike’s business has expanded into buying most things that he deems valuable if the price is right.

I have discovered in the episodes that there are basically three types of owners of things that Mike and Frankie look through.  There are the ones that have an unorganized mess of things, the ones who have somewhat of an organization but still it is somewhat messy, and the ones who have everything in order and in great condition.  There are also different attitudes about the stuff that they own.  Some are anxious to sell and sometimes vastly under estimate the value of stuff that they have.  Some are willing to sell certain things but certain items are not for sale.  Lastly is the people that treasure their items so much that nothing is for sale. 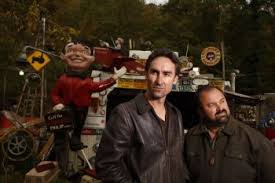 I am amazed at times when Mike or Frankie happen to stumble on an item buried in a pile and ask for a price only to find that it isn’t for sale.  Sometimes it is an item that the person forgot that they have.  Then there are times especially with the collections that are in great shape the owner knows the value and it shows in the price they want for the item.  Even though they have tons to offer sometimes they are unwilling to sell unless they get top dollar.  Finally there are the people that are happy to sell just to get rid of the items.  To their credit I have seen both Mike and Frankie offer more than what the person wanted because they knew the item was valuable and they could re-sell it!

I’m thinking about this whole pickers thing and it occurs to me that God is a picker too!  Now don’t get me wrong, he is not interested in material things.  In the show Mike and Frank are strangers to these people.  Let’s say that the person wanting something in their pile was a son or daughter that they loved very much.  I’ll bet they would be willing to give that loved family member anything that they wanted if it made them happy! We all have valuable gifts that God has given each of us!  How many of us know we are gifted and don’t necessarily want to give our gifts to God?  How many of us have a big pile of gifts that we haven’t used in years and sometimes we forget we even have them, yet when God asks for our gifts we don’t want to give them up?  God wants us to freely give what is given to us for his glory!  We need to be like those people whose attitudes are “if you can use my gift, I’m willing to give it to you.  Let our prayer be “God, I am yours and everything that I have and that I am is yours.  Please take anything that I have to offer and use it for your glory because you gave the ultimate gift to me and I love you with all of my heart!

As every man hath received the gift, even so minister the same one to another , as good stewards of the manifold grace of God.

5 thoughts on “Picking Our Gifts!”