I heard a story once about a frog.  This frog was placed in a large pan of warm water and he was happy and comfortable.  The water was placed on a burner and it was turned to low.  Very gradually the temperature increased but because it was such a gradual increase the frog didn’t notice.  At the end the frog died from the heat of the boiling water. 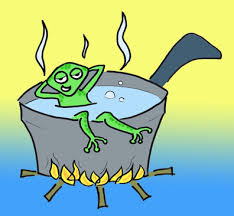 The phone rings right in the middle of dinner, a favorite show, or maybe as you are just relaxing.   I used to answer all of the calls.  You never knew when somebody important was calling.  Maybe it was an urgent call or an emergency, you never knew.  That was before the days of answering machines and caller ID.  One of the greatest inventions ever in my opinion is the Caller ID! It lets you know who is calling!  In my case the ID might say Michigan Caller, or Florida Call.  These calls are obviously telemarketers because I don’t know anyone in Florida and “Michigan Call” is too vague.  We have our phone set up where if it is friends or family music plays after the phone rings twice.  Sometimes someone calls that we want to talk to that the caller isn’t in that circle.  A quick look at the ID and we can quickly pick up.  Otherwise if one of those outside callers calls they can leave a message.  Almost all of the time they hang up.  If they can’t leave a message more often than not they were trying to sell me something and knew it couldn’t be accomplished on the answering machine.

There are times where I have answered calls that seemed suspicious.  At those times I answered but my guard was up.  If there is a delay after the original hello that is a sign for me to hang up.  I know that telemarketers use a phone calling machine.  Once someone answers, it takes a few seconds for the caller to realize it and connect to that victim.  The answering machine system is not perfect.  I’m reminded of an old friend receiving my call from a cell phone.  Obviously it came up on his ID as “Cell phone call” and he answered but he was on the defensive.  After some cold comments he realized it was me and had to apologize.  The same thing has happened to calls I have picked up.  I’m reminded of someone who called from the other side of the state whose husband was featured in one of my stories.  She asked if I had a few minutes and I said “no, I’m on my lunch hour.”  She wondered if she could call back at a better time and I asked what it was about?  When she told me I was glad to make the time right then after apologizing for my rudeness. 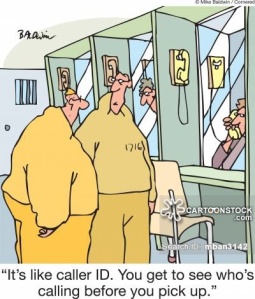 There is a commercial on the radio that goes like this.  The phone rings and the lady picks it up.  “I hear you are going on vacation”, the voice begins, “we are going to come over and rob your house.”  With this warning the lady yells to her husband about buying security protection before they leave.  The commercial states “Wouldn’t it be nice if life gave you warnings?”  Of course it would!  If we knew what danger we were in or were about to get into we could avoid it at all costs!  Of course I can’t remember who sponsors the commercial but I do remember them saying that “unfortunately life doesn’t usually give us warnings.”

Likewise the Devil doesn’t give us a warning of what he is trying to do.  Jesus stated that “The thief comes only to steal, kill, and destroy.”  John 10:10. In contrast as the verse continues Jesus stated that “I came so that you may have life and have it more abundantly.”  So in essence it is a choice between life and death.  It would be an easy choice if our guard is always up!  Unfortunately many of us find ourselves in the boiling pot not realizing that we are slowly dying. 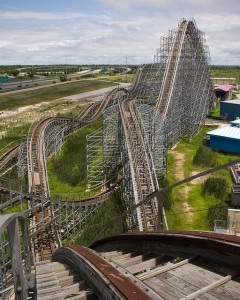 The man there at the carnival
gave us all a pass
He said, Ride on my little ride
I won’t make it go too fast

The crowd pushed hard, and I went too
but I wanted to turn back
That ride looked old and rusty
thee were pieces off the track

Oh, Mr. Carnival man, the others yelled,
Turn that lever to the hilt,
for this ride will get boring
if it isn’t at full tilt

Mr. Carnival man, I yelled to him
This ride can hold no more!
But he just sneered and turned away
as he locked my little door

Please let me off this crazy ride!
It’s too crowded here for me
This ride is a death trap,
an awful place to be!

He looked my way with hateful eyes
With a mean and raspy voice
he said, You better just shut up,
You know you made the choice

I cried out as I shook that cage,
Somebody save the day!
This rides not safe and I want out,
unlock this door I pray!

Out of that crown one man came
He called out clear and loud,
Whoever wants out of this trap
I’ll save you all right now

I raised my hand, he pried that door
and I was safely free
Some others got out while they could
but most were mad at me

I saw the lonely, desperate looks
in their glaring, hate-filled eyes
They were looking for excitement
on that old death trap ride

The carnival man then grabbed the switch,
the ride was in full gear
The people clung on tightly
out of reflex and of fear

That old roller coaster went up the track
then it went straight down
As I had feared, the track just broke
with a thudding, crashing sound

There were bodies flying everywhere,
such a needless tragedy
I wish they would have listened
when their chance came to be free.

So I went home and thought a lot
It wouldn’t leave my mind,
just how I could have ended up
if that man was not so kind

I went back,there the next day,
surely that ride would be torn down
My eyes seemed to deceive me
with the shocking sight I found

A crowd was waiting to get on
with glaring, fearful eyes
Please leave this line, I pleaded,
and I began to cry

I saw the horrible tragedy
that happened yesterday
But most just glared right through me,
The yelled, Get out of the way!

The carnival man yanked on the switch
I heard his laugh so brash
We got some more, he yelled again
Then I heard the sickening crash

He laughed some more as his workers
cleaned up all of the debris
Come one, come all, get on my ride
It’s exciting and it’s free.

….and that they will come to their
senses and escape from the trap
of the devil, who has taken
them captive to do his will.

Posted in A Different Look At Dying