I Give You My Words!

My words were not always easy to understand.  When I was six or seven I had trouble talking.  Today you wouldn’t picture me lacking communication skills but I did.   It wasn’t that I was shy, it was a case of people trying to understand me and not being able to.  My problem was my lack of knowledge on how to form my words.  There were certain basic sounds that I was not grasping.  If you think about it our language is made up of basic sounds.  Failure to pronounce those sounds will lead to a  communications problem.  At six or seven I didn’t really realize anything was wrong.  That is where a man named Mr. Vell stepped in.  Mr. Vell worked with kids like me that had a difficult time pronouncing their words.  He was bald headed and always wore a suit.  The characteristic that I remember most about Mr. Vell was that he was missing a hand.  Kids are drawn to uniqueness and a rumor surfaced that he lost his hand sticking it out the window while driving.  I never was able to get confirmation or denial on this rumor.  When Mr. Vell was working with the group of us that needed him his missing hand was never far out of my sight and mind. 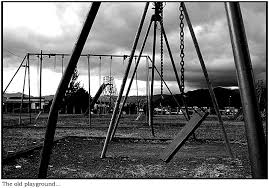 One of the things that I loved about school at that time was recess.  Being able to run out on the playground with a favorite rubber ball or sliding down the slide was like heaven.  Right in the middle of my playground fun I’d hear a commotion.  There by the school was Mr. Vell waiving his only hand to get  my attention.  He had warned that he would be rounding us up.  How soon I forgot as I got my mind on my playground fun!  Quickly myself and my bad speech classmates realized that play was over.  Mr. Vell had a room with a table for us to sit at.  At the end of the table he sat and four or five of us would sit on the sides.  He pinpointed sounds that we were not making.  I think I was the worst in the class as each sound he asked for was totally different when I attempted it.  I’m sure there were many sounds that went awry for me, but two that I remember most that got his attention were my R’s and S’s.  Instead of attempting a word he had me attempting the sound.  He described R as the sound of a fire engine.  So he had me forming my lips in a pucker and making a fire engine sound.  To kids that is a fun way to learn.  Instead of trying to learn a complicated concept I was instead picturing a fire engine as I made it’s sound!  Mr. Vell had the same simple concept with my S’s.  He said that the S sound is like a snake.  At the time I was pronouncing snake (nake) assuming I had the K sound down.  Mr. Vell had me practice the sound the snake makes sssssssssss.  Before you knew it he was combining the sound of the snake with the rest of the word and I had it!  Those are the two letters I really remember but I’m positive that Mr. Vell helped me with all sorts of sounds.  Mr. Vell helped me so much over that year that it is ironic that he was missing a hand.  Looking back it seems that the helping hand he provided should be missing because he gave it to me!

As I began to pronounce my words better people started to understand me.   As I grew up I learned that the basic fabric in human co-existence is being able to communicate and understand each other.  Letting others know that you love them or that something they are doing is not acceptable.  Trusting people and making agreements on that trust.  Written words that clearly specify what each party needs to do to fulfill the contract.  Saying words that you truly mean without some hidden agenda behind them.  Making promises that you truly intend to fulfill.

I have learned over the years that it isn’t the understanding of words that is  the problem with adults as much as the lack of being truthful in the words that we use.  Sometimes this lack of truthfulness is justified in our minds by the fear of hurting someones feelings.  The classic questions like “How do I look in this dress?”, comes to mind.  Other times we are not truthful because we just don’t want to be put into a light of looking bad.  Maybe something went wrong that was actually my fault in some way.  If I could deflect the blame to someone else it would put a better light on me.  Then there are times that for one reason or another we deceive people into thinking one thing when the truth is something else.  Sometimes words are used and sometimes we just let them assume the wrong thing.  For example, If someone else actually did something commendable but I got the credit and I didn’t set the record straight.

With elections coming up we see all kinds of promises.  Years later we will look back and examine the evidence.  So and so promised this and that but look what really happened.  Politics are full of broken promises.  Say anything to get elected is the motto we see so much.  Too often we see and hear ads that just sling mud on the opponent.  They aren’t about how the person placing the ads will make things better.  They are about how if the opponent gets elected his or her actions will cause disaster.

John Fetzer, the radio giant in days gone by had a book written about him.  The title said it all as far as his motto was concerned “On A Handshake.”  Phil Wrigley, the chewing gum giant of yesteryear preferred to have agreements with people without formal documents being made up.  Where is the trust that they had back then today?  When is a persons word truly their bond today?  How often do you wonder when someone said something if they will actually follow through?  People use words today because they sound good at the time.  “We’ll definitely have to get together” or “we’ll invite you to dinner sometime” might be offered with no intent on making it happen.  Words are powerful, yet words can be cheap too depending on who is using them and their trustworthiness.

Have you seen commercials about new medicines designed to cure diseases or at least symptoms?  After the commercial a long disclaimer is read.  You notice that the disclaimer is read much faster than the original commercial.  Sometimes instead of reading the disclaimer aloud they flash it in really fine print.  Nobody could possibly read the whole content in the limited few seconds that they give you.  How about actual contracts that we get into?  We see the basic stuff that we agree to but sooner or later we run into fine print.  They used to say that the fine print takes away what the big print gives.  With all of the sneakiness going around how easy is it to trust someone?  You learn also that it doesn’t matter what someone tells you.  They can tell you all kinds of things that you are agreeing to, but the contract that you sign is really what counts.  It’s no wonder that often we need a lawyer present to find the hidden realities of what we are signing.

When I was first learning to form my words and become understood I never dreamed that words even pronounced perfectly could become so unclear.  I never realized that people used words not only to communicate, but to get the upper hand on others.  When Mr. Vell waived his good hand at me to quit playing games and learn how to communicate, I never even imagined that grownups who spoke fluently were being called to do the same thing.  Aren’t you glad that we can trust God?  Aren’t you glad that he speaks only the truth and his contract with us is straight forward with no hidden surprises?

I examined it with a fine toothed comb
A lot of time was spent
to try to find restrictions
Where was all the fine print?

It promised me eternal life,
a heavenly home I’d win
if I just opened up my heart
and let the Savior in

Yet the contract says, whosoever will,
that has to include me
It says it is a gift from God
and it’s absolutely free

Now I’ve accepted his free gift
and my life has changed, no doubt
I cannot work salvation in
but I certainly can work it out

There’s someone who is at your door
with his contract for you today
Will you accept his free gift
or send him on his way?

But God found fault with the
people and said: “The time is
coming, declares the Lord, when
I will make a new covenant with
the house of Israel and with the
house of Judah.

One thought on “I Give You My Words!”