The year was 1949 and Louis Zamperini was in a broken marriage that was apparently about to crash into a thousand pieces.  His wife, who he had married shortly after he returned from the war had recently become a Christian.  In an effort to save his marriage he agreed to attend a Billy Graham service that night.  Billy Graham preached about how we all have sinned and come short of the glory of God.  Graham talked about being forgiven and Louis thought about the dark dreams of being tortured that he was having.  Louis knew that forgiveness wouldn’t be easy but it needed to come from his heart too.  Then Louis remembered his many vows to God that he had made while clinging to life on a life raft in the ocean for 47 days.

Obstacles came early to Louis Zamperini and his family.  When they first moved to Torrence, California none of them spoke English.  Louis was the victim of bully attacks at every turn.  Often Louis came home beaten and because of this his father taught him the art of self defense  to defend himself.  As Louis learned how to fight he looked for revenge against kids that bullied him in the past. He became a bully as he viciously got even with his one time tormenters.  His brother, who was a star runner, decided to take Louis with him.  He thought that Louis could channel that bully energy into something good.  Louis ran with his brother and when he wasn’t keeping up his brother used a whip on his legs to push him much like a jockey whips a horse.  As Louis started placing in races he discovered that he was gaining more attention with his classmates.  Before he felt ignored or almost like he wasn’t there, but now he was feeling like he belonged.  This feeling of importance pushed him in his running.  He dedicated his life totally to running and he improved in leaps and bounds.  Years later he would admit that he was all in and that he wouldn’t even touch a milkshake for fear of it’s harmful effects to his running.

Starting with his first cross country race and continuing his final three years in high school Louis went undefeated!  In 1934 he set a high school record for the mile with a time of 4:21.2!  A week later he won the CIF California State Meet Championship with a time of 4:27.8!  That accomplishment helped him win a scholarship at the University of Southern California!  In 1936 Louis decided that he wanted to run in the Olympics.  That year the qualifying took place in Randalls Island, New York.  In those days runners had to pay their own transportation fees to get to the event.  Luckily for Louis his father worked for the railroad and was able to get him free transportation.  A bigger problem was expense money once he got there.  That problem was solved by the generosity of local Torrence merchants who raised expense money for their local hero!

Louis decided to enter the 5000 meter race when he arrived.  The 1500 meter had a strong field and Louis felt his chances were better to qualify in the longer race.  His chief competition would be the American record holder in the event Don Lash.  The event would test Zamperini’s ability to survive as it was ran on one of the hottest days of the year.  The race saw co-favorite Norm Bright and many others collapse during the race.  Determined with everything he had within him despite the obstacles Zamperini finished in a dead heat with Lash!  They would both represent the United States in the Berlin, Germany Olympics as Louis became the youngest American qualifier ever in the 5000 meter at only 19 years old! 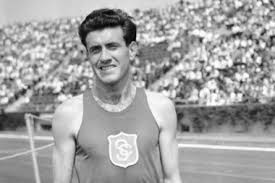 Zamperini qualified for the finals in one of the three preliminary runs where only the top five advanced.  In the final he finished eighth in the world ahead of his fellow American teammate Don Lash!  He had a finishing lap of 56 seconds which was so fast that it got Adolph Hitler’s attention.  Hitler made a request to meet Zamperini and Zamperini remembered his words of “Ah, your the boy with the fast finish!”  After the Olympics Zamperini went on with his running.  In 1938 he set a national collegiate mile record of 4:08 that stood for fifteen years!

Zamperini enlisted in the Air Force in September of 1941 and earned a commission as a second lieutenant.  He was deployed to the Pacific island of Funafuti as a bombardier on the B-24 Liberator bomber Super Man. In April, 1943, during a bombing mission against the Japanese held island of Nauru, the plane was badly damaged in combat. With Super Man no longer flight-worthy, and a number of the crew injured, the healthy crew-members were transferred to Hawaii to await reassignment. Zamperini, along with some other former Super Man crew were assigned to conduct a search for a lost aircraft and crew. They were given another B-24, The Green Hornet, notorious among the pilots as a defective “lemon plane”. While on the search, mechanical difficulties caused the plane to crash into the ocean 850 miles west of Oahu, killing eight of the eleven men aboard. 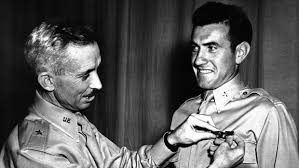 The three survivors (Zamperini and his crewmates, pilot Russel Allen “Phil” Phillips and Francis “Mac” McNamara), with little food and no water, subsisted on captured rainwater and small fish eaten raw. They caught two albatrosses, which they ate and used to catch fish, all while fending off constant shark attacks and nearly being capsized by a storm. They were strafed multiple times by a Japanese bomber, which punctured their life raft, but no one was hit. McNamara died after 33 days at sea.[]

How could anyone keep going in such circumstances?  Day after day wondering if it would be your last.  Riding up and down pushed by the ocean waves on a little raft.  Having to bury their fellow initial survivor after he couldn’t make it on the 33rd day.  Yet Zamperini and Phillips kept hope alive.  They kept thinking that by some miracle they would survive even when the odds seemed so small.  That was when Zamperini first got serious with God.  It had to be like one of those promises that we all might say during stressful times.  “God, if you get me out of this I will do whatever you want me to do!”

On their 47th day adrift, Zamperini and Phillips reached land in the Marshall Islands and were immediately captured by the Japanese Navy.[21] They were held in captivity, severely beaten, and mistreated until the end of the war in August 1945. Initially held at Kwajalein Atoll, after 42 days they were transferred to the Japanese prisoner-of-war camp at Ōfuna, for captives who were not registered as prisoners of war (POW). Zamperini was later transferred to Tokyo’s Ōmori POW camp, and was eventually transferred to the Naoetsu POW camp in northern Japan, where he stayed until the war ended. He was tormented by prison guard Mutsuhiro Watanabe (nicknamed “The Bird”), who was later included in General Douglas MacArthur‘s list of the 40 most wanted war criminals in Japan. Held at the same camp was then-Major Greg “Pappy” Boyington, and in his book, Baa Baa Black Sheep, he discusses Zamperini and the Italian recipes Zamperini would write to keep the prisoners’ minds off the food and conditions.[18] Zamperini had at first been declared missing at sea, and then, a year and a day after his disappearance, KIA. When he eventually returned home he received a hero’s welcome.

Can you imagine after surviving on a raft for 47 days and finally seeing land how excited Zamperini and Phillips must have been.  Normally it would have been a thrilling time for them along with their rescuers.  They would have been taken to a hospital and nourished back to full strength.  Can you imagine being so weak after such an experience only to face the reality of being captured by the enemy?  Day after day for the next two years Zamperini was mistreated and beaten but never broken.

As Zamperini was sitting in the Billy Graham meeting he thought about all of the people that had wronged him.  He thought about the beatings he had taken and all of the reasons he should never forgive any of them.  Then he thought about the commitment he was about to make.  It couldn’t have been easy but he decided to forgive his enemies much like Jesus did when he died upon the cross.  After that night Zamperini was a changed man.  No longer did he have the dark dreams that were torturing him as much as his prisoner experiences had.  Now he had a peace about him and a love that he couldn’t understand.

Billy Graham helped Zamperini in his next mission of becoming an inspirational speaker.  Through the years when people heard his story they listened.  It was such an amazing story that people were drawn to God by it!  How could a man who suffered so much and was treated so badly be willing to forgive and forget?  It could only be through God that it was possible. 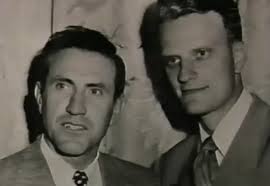 Through the years Zamperini visited many of the guards who mistreated him in prison.  He always let them know that he had forgiven them.  The ones who experienced his forgiveness were shocked that he would feel that way.  As hard as most of their hearts were they had to be softened by this man who only had love in his heart.  They had to feel enormous guilt for what they had done to him.  They had to see a man who in spite of everything that happened was living such a victorious live!

Until the day he died Zamperini went around the world preaching forgiveness.  He was on “The Tonight Show” with Jay Leno telling his life story only a couple of years ago.  He talked about his Olympic days which people in our sports crazy society wanted to hear.  He talked about the torture that he lived through while in the P.O.W. camp.  He was an old man now at 95.  His loving wife was with him for 55 years until she passed away in 2001.  Yes God put that broken relationship together in a beautiful way! Long ago Zamperini was pronounced dead as the American Government notified his parents that he was lost at sea.  Later he was returned home to a heroes welcome!  It was like he came back to life again!  Four years later he died again.  This death was a death to his old life.  After that time he started living a new life in Christ!  Earlier this year Zamperini left us at 97.  Most of us will never see that age but God must have given him extra years as his reward.  The title of his movie coming out in December is called “Unbroken”.  It is a story of inspiration and hope no matter what you are going through.  On one night however Zamberini became a broken man.  That was when he stopped living and let God take over.  After that God rewarded him with many peaceful years of sharing his story of love, hope, and forgiveness!

I have fought a good fight, I have finished my course, I have kept the faith:
II Timothy 4:7

Posted in Love, Sports and Christianity

3 thoughts on “Unbroken Yet Broken”