Hitching A Ride To Heaven

Have you ever felt that God was talking to you and you knew exactly what he wanted you to do? This was the case for a man named Bob Weiner. Just before Bob founded Maranatha Campus Ministries he had become engaged to a wonderful Christian lady named Rose Russell. They met in California but Rose was from Kentucky. When the time came for Bob to meet her parents he was nervous. Rose’s father was a distinguished Methodist preacher with many degrees and Rose was such a deeply committed Christian. Bob on the other hand had found Christ in California and in his own words was truly an honest to goodness Jesus person. Could he measure up to her parents standard of who they wanted for her husband? Many thoughts such as these went through Bob’s head as he was on the flight to Kentucky. As it turned out all of his worrying was in vain. Bob and her parents got along fine as Bob tried to show them that he was a mature Christian man and her parents had nothing to worry about. Bob had planned to take a flight from Kentucky to Chicago and then from Chicago back to California. Just before he booked his flight he heard a voice in his spirit. “Bob, I want you to hitchhike to Chicago.” At first Bob tried to dismiss the notion. It was several hundred miles away and besides what would Rose’s parents think? Bob was not happy about the situation. After all he had tried to convince her parents that his feet were firmly planted on the ground and he was a mature stable Christian man. Still the voice was strong and he could not say no. “I want you to hitchhike to Chicago.” Finally Bob told them of his plans. “You know”, he began “this might sound kind of strange but I really sense that the Lord wants me to hitchhike back to Chicago.” To his surprise her parents didn’t seem overly surprised. It was almost like if that is what he sensed God wanted he should do it!

Rose and her mother dropped Bob off at the edge of the city. It was run down and Bob cringed, but he knew he had to be obedient to that heavenly voice. The first person to pick him up was a sixty five year old man who had recently retired. The man told Bob that he normally didn’t pick up hitchhikers but there was something about Bob that made him stop. Later he admitted that his life was empty and he didn’t know what was missing. Bob told him what was missing was a personal relationship with Jesus Christ. He went on to tell him what Christ had done in his life and assured him that he would find the same peace and joy if he surrendered his life to the Lord. Within ten minutes after he picked Bob up they pulled over to the side of the road and the man was sobbing as he gave his life to Jesus! He wasn’t going much further and that was OK with Bob. Bob was beginning to see that he was doing exactly what God wanted!

Once again Bob found himself on the side of the road with his thumb in the air. Within 20 minutes an old Chevrolet pulled over and the young man behind the wheel motioned for Bob to get in. “Where are you headed”, he asked. “Chicago”, Bob said. “Well I’m only going thirty miles”, which was fine with Bob. Bob knew something that the driver didn’t. Their meeting was no accident, it was meant to be. As they headed down the road the man started talking about the war in Vietnam and all the unrest in the country. He had just got back from Vietnam and had seen many of his friends killed. He couldn’t understand how everyone seemed ungrateful and why he couldn’t get a job. He had been searching and let it be known that he would do anything, but had been unsuccessful. That wasn’t the worst of it however. He had been told that his girlfriend was pregnant. He wanted to marry her but he wondered if he could ever support her? Bob started telling him about Jesus Christ and what a difference the Lord made in his life. At first the man was skeptical but when Bob told him he was specifically hitchhiking to Chicago because he felt the Lord wanted him to the driver became convinced! Before he dropped Bob off he too surrendered his life to Christ! Bob prayed with him to open the job door that up until now had been closed.

Another man picked Bob up a short time later. “I’m only going five miles”, he said. “I’m on my way to a softball game.” He was wearing a shirt with a church written on the front. “Are you a Christian?”, Bob inquired. “Well sort of…”, was his reply. As they talked further the man admitted that he wasn’t really living for the Lord. He went to the church and played on its softball team but that was about it. Somewhere along the line he had lost his enthusiasm. As they were driving he recommitted his life to the Lord. Tears were flowing down his face! I’m so glad that I picked you up! “Listen, would you come to the game with me? I’d like you to talk to the rest of the guys on the team.” When they got to the field he introduced Bob telling his team that this man changed his life today! Before Bob knew it he found himself on the infield dirt with all of the members of both teams listening to his testimony! Bob challenged them to recommit their lives to Christ and start living for him. By a show of hands three fourths of the players indicated that they wanted to turn their lives over to Jesus. Players were crying and hugging each other and as Bob described “it was an incredible scene!” The softball game was anticlimactic. Bob was having a wonderful time and had long since asked for forgiveness for his attitude before the trip. At the same time he began wondering when he would ever get to Chicago? He hadn’t gone over one hundred miles and still had a lot of territory to cover.

A late model luxury car wheeled off of the road just beyond him. At least I’ll be riding in luxury this time, Bob thought.

The middle aged man behind the wheel told Bob that he was a professor at Southern Illinois University. He had two PH.D’s and seemed to know everything about everything. He was going to a meeting in Champaign, Illinois which was good news to Bob because that would take him down the road for awhile. “Have you ever accepted Christ?”, Bob inquired. The man shook his head, “No Bob, I’m an Atheist.” “I have some questions that no one has been able to answer.” “I’ll tell you what, if you can answer them to my satisfaction I will pull the car over right now and give my life to Christ.” “OK shoot”, Bob replied. The man’s first question was Where did God come from? The next two questions were also very philosophical. Bob sat silent for awhile as he prayed. “God if ever I needed wisdom I need it right now!” “Well”, the man stated as Bob sat silent. Bob was sure that the man thought he was thinking of an answer when in fact Bob was praying. OK Lord, here it goes. He opened his mouth but the words were not his. God gave him wisdom and Bob was speaking the words as they came. When he had finished talking the professor had a look of astonishment on his face. “I’ve never, ever heard an answer like that!” He paused for a moment then went on. “I’m convinced that you answered my questions and I’m ready to give my life to Christ!” Once again Bob found himself on the side of the road leading someone into the kingdom! The man was so happy that he was beaming! All of his searching was over. Bob noticed that his entire appearance changed and was amazed what a difference God had made in his life already! They were still about thirty miles from Champaign which meant another two hours to Chicago but Bob’s new found friend insisted on driving him the distance. “It is the least I can do for all that you did for me!” Bob felt a peace about the situation so he graciously accepted the gift of driving his new friend offered! (isn’t it ironic that God would let Bob ride most of the trip in style?) The rest of the traveling was a joyous celebration as Bob told the professor of the people he had met and the lives that were changed!

My mom and dad had a situation with a hitchhiker that was completely different. My dad must have had a heart for hitchhikers because I can remember times he picked them up on our trips to and from Alabama. I believe that this particular episode happened before I arrived. My sister was just a toddler. Anyway dad saw a hitchhiker on the side of the road and informed mom that he was going to pick him up. The hitchhiker along with his belongings entered the back door and they were off again. It wasn’t long after picking up the hitchhiker that dad discovered to his alarm that their lives were in immediate danger. As he was motoring along on the highway the gas pedal got stuck and the cars speed hit one hundred miles an hour! The hitchhiker instantly dove to the front of the car and pried the gas pedal off of the floor. Without him they surely would have had a horrible fatal crash.

Jesus is a lot like that hitchhiker my parents picked up years ago. The difference being that our lives are already out of control when Jesus comes in and saves us! Without Jesus we are headed for a fatal crash. With him in our lives instead of an eminent crash, our lives can have meaning! There is hope in the journey and after the journey! 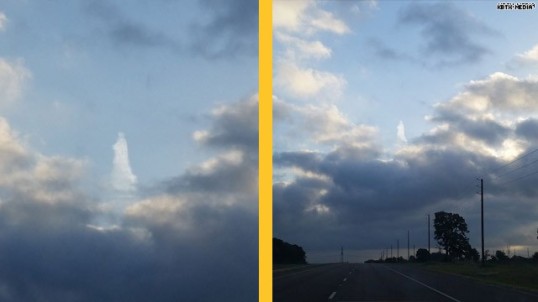 Showing them the way to heaven!

By trusting in his faith Bob acted as a representative of Jesus. He was willing to walk in faith and be used for God’s glory. Bob’s meetings with all of those people was the will of God for him that day. By Bob’s willingness to obey that small voice that he heard he was able to introduce people that God put in his path to Jesus who changed their lives. As I travel around these days I don’t see many hitchhikers. It definitely isn’t as common as it used to be. We don’t have to hitchhike or pick up hitchhikers to be in God’s will. The key to Bob’s success was listening and obeying the Lords voice. By doing so he put himself on the Godly road that led him to lost souls. When we are willing to listen to God like Bob did, he will put the people in our lives that we can lead to Jesus! Just as Bob did as a hitchhiker, we too can enter peoples lives as the spirit leads and introduce them to the one who can give them peace and joy!

5 thoughts on “Hitching A Ride To Heaven”