When I was really young I learned how to make toast.  We didn’t have a toaster so the job was a little harder.  After buttering the bread I knew that the proper setting of the oven was broil.  Usually I would make three or four pieces that I’d place on a cookie sheet.  One morning I wanted to expand my wings and make biscuits.  I found a package of biscuits and opened it (banging it on the side of the counter) just as I saw mom do.  Carefully I tore off each biscuit and placed them on my cookie sheet.  Then I turned the oven to broil and waited for my biscuits to get done.  When mom got up I showed her my cooking feat.  She wondered what temperature I cooked them at because the biscuits were brown on top but white on the outside.  When I told her that I cooked them on broil like toast she understood.  Patiently she told me biscuits unlike toast needed to be cooked at 350 or whatever the temperature was.  While toast got done quickly biscuits needed extra time for them to cook thoroughly. 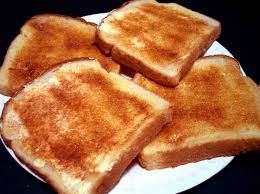 My son uses the word toast in an interesting way.  While my usage of the word always referred to the actual toasted bread, he uses it as a descriptive word.  When watching a sporting event where a team seems hopelessly behind he might say they are toast.  In that instance he compares the done piece of bread to their chances of coming back.  It is a good comparison because toast is normally made in a toaster.  Usually when the toast pops up it is done.  Pushing it back in the toaster will not make it better and in fact will run the risk of burning it.  Many times you can see it in the players demeanor as they know the end is near. Head down, scuffling around, and just going through the motions are signs that the player has given up.  So whenever my sons subject is described as toast it can only mean they are done, finished, through, or whatever other final word you choose to use.

At the age of 40 Colonel Harlen Sanders was running a service station and feeding hungry travelers.  He eventually moved to a restaurant across the street where he made chicken so tasty that it was noted by Kentucky’s  Governor who named him a Kentucky Colonel.  I’m sure when the Colonel at the age of 62 closed his restaurant many thought he was toast.  However he had another big dream in mind.  After closing his restaurant instead of retiring he chose to travel the countryside cooking batches of chicken for restaurants and striking deals that would pay him 5 cents for every chicken the restaurant sold.  He started offering franchise opportunities and sold more than 600 by 1964.  At that time he decided to sell his rights to the company for 2 million dollars!  At the time of sale the Colonel was almost 74 years old.  Though he no longer was an owner his face has remained the face of the franchise and he made trips around the world  representing the company as a spokesman.  Kentucky Fried Chicken as of 2013 had 18,875 outlets in 118 countries and territories around the world and they have one Colonel Sanders to thank.  At an age when many retire the Colonel made his later years his most successful!  He knew that he had something that people liked and in dedicating himself to the mission he made himself and thousands of others successful through the years!  By coincidence it can be noted that along with the chicken and other extras such as potatoes there is usually a biscuit (not toast) in the KFC meal.

The Bible has a lot of encouraging things to say about aging!  Proverbs 16:31 states that “Gray hair is a crown of glory, it is gained in a righteous life.”  Psalms 92:14 states that “They still bear fruit in their old age; they are ever full of sap and green.”   Proverbs 20:29 mentions that “The glory of young men is their strength, but the splendor of old men is their gray hair.”

You may be at a time in your life where you feel your accomplishments are in your past.  Colonel Sanders could have felt the same way.  After all he was very successful in his business and at 62 could have retired to a good life.  Somewhere in his spirit however there was a desire.  It was something that he felt that he wanted to accomplish to be fulfilled.  His story is a great example to all of us that it is never too late.  The message that we as Christians have to give is far more important than a chicken recipe.  Though we may not be able to travel the world to spread the good news we can travel our individual worlds.  A kind smile or a helping hand can show our light as we show our love to others. 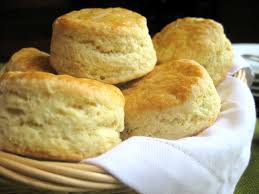 If I remember the story correctly mom put those biscuits back in the oven and cooked them at the right temperature.  My mistake was corrected and they came out just the way they were meant to be.  Maybe that is how God looks at our lives.  When we think that our lives are toast God has a different view.  We are not toast to him.  Like the biscuits he is not done with us yet!