Victory Beyond The Old One Two

He was an angry man.  Had he won that fight he would have forced Mohammad Ali to fight him again and he could get his title back.  George Foreman didn’t call it the Heavyweight Title, he called it his title.  The year was 1977 and George Foreman had been on the comeback trail.  He had won five consecutive fights and that night he fought a man named Jimmy Young.  George had a devastating punch.  Usually his fights would end with his opponent on the canvas.  This fight would be different.  Jimmy Young lasted the whole fight.  When the decision was read it was Young who had his glove raised.  George was crushed as he walked around in the steamy hot dressing room.  He had heard that after a match you should never sit down.  He paced back and forth and felt weakness in his legs.  “I feel like I’m going to”, and before he could say die he passed out.

George Foreman at a joyless time in his life.

George Foreman was born in Marshall Texas in 1949 and grew up in Houston’s rough Fifth Ward District.  Looking back he called himself a thug as he dropped out of school in the ninth grade, and ran the streets.  In 1965 he joined the Jobs Corps and that decision changed the direction of his life.  At the age of 16 the Jobs Corps provided him with a connection to the boxing world.  It was in a trainer named Doc Broaddus.  Doc encouraged George to apply his fighting skills to the ring instead of the streets.

George developed quickly as a boxer.  He had a mean streak that seemed to help him when he got his opponent in trouble.  He was always able to summon the old one two at just the right time.  He made the 1968 Olympic team and after winning the gold medal he made headlines waiving a little American flag.  This was the Olympic games where two African American runners raised clinched fists wearing black gloves in tribute to black power.  In contrast George’s waiving of the American flag made the statement that he was proud of the country he represented. 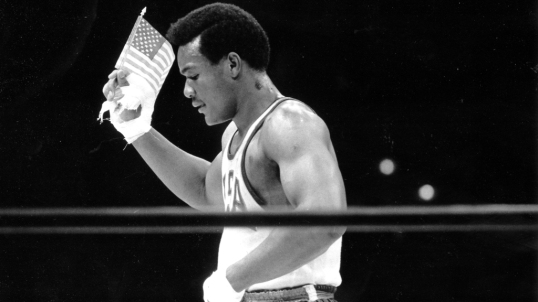 After the Olympics George turned pro.  There was much learning to do but he rose in the ranks with each success.  George was 6 feet 3 1/2 inches and 218 pounds of raw muscle.  He was feared by everyone he fought because of his ability to pound his opponents unmercifully to the canvas. He won his first 37 professional fights which earned him a shot at the heavyweight champion “Smokin” Joe Frazier.  It was 1973 and George was a heavy underdog.   The fight was held January 22, 1973, in Kingston Jamaica.  Shockingly George knocked  Joe Frazier down six times in the two round fight.  Finally the referee stopped the bout and George’s glove was raised in victory. 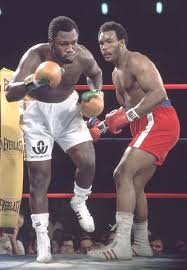 The next two fights were more of the same for George.  He knocked out Jose (King) Roman in one round and Kenny Norton in two rounds.  He was on top of the boxing world and didn’t think he could be beaten.  Gladly he accepted the challenge of Mohammad Ali.  Ali had been the heavyweight champion before being stripped of his title for refusing to go into the army.  He was finally reinstated to boxing after 3 and a half years and lost his attempt to regain the title from Joe Frazier in 1971.  Now it was 1974 and George didn’t think he could possibly lose.  After all he was destroying everyone in his path in one or two rounds.The bout was held in Zaire South Africa and was billed “The Rumble In The Jungle”.  George came out strong like he always did.  Charging and bulling his way in he continuously got Ali on the ropes.  Ali was different than any opponent he had ever faced however.  When George hit Ali with his best shots Ali would talk to George.  “Is that all you got George?”, he repeated over and over.  George continued to be the aggressor but Ali kept George off balance with his speedy jabs later in the rounds.  Ali started laying on the ropes and inviting George to come and take his best shots.  George did not hesitate and once again he kept hearing Ali talking.  “Is that all you got George?”  In his head George had the thought that wouldn’t go away.  “Yep that’s about it.”  It was a close fight but by the 8th round George was spent.  He wasn’t used to going more than two rounds in his bouts and here Ali was still strong as the 8th round was coming to a close.  Suddenly Ali hit George with a punch to the back of the head and with lightning speed he hit him two more times.  George felt himself dropping to the mat and realized the referee was counting him out.  At the count of 9 George was on his feet but the referee stopped the fight and declared Ali the winner by knockout.

It was an embarrassing loss to George and it took him awhile before he laced the gloves up again.  He was bitter at Ali and bitter at a lot of people that he felt did him wrong.  His anger was so deep that he couldn’t figure out a way to hurt all of the people that were burning in his heart.  He took his anger out on his opponents and after not fighting at all in 1975 he had four bouts in 1976 winning all of them in short order.  By 1977 George was being talked about again for another title shot.  Ali had been able to keep the title that he won from George.  George was matched against Pedro Agosto in January of 1977 and won by a first round knockout.  The fight with Jimmy Young was made and George felt that it would be the warmup he needed
before facing Ali again. 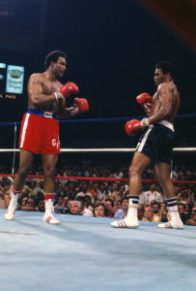 Jimmy Young was a fighter much like Ali.  He was a very good defensive fighter who had quick hands.  George plowed in determined to hit Jimmy Young with the hay maker that would stop the fight.  Jimmy was able to block George’s attempts again and again and jab his head with a pestering left.  Round after round the same thing happened.  George charging in only to get sent away by Jimmy’s quick hands.  In the 7th round something different happened.  George plowed in as usual but this time he connected.  Jimmy was hurt and staggered to the other side of the ring.  George was right after him determined to put Jimmy on the canvas for good.  Somehow in his hurt condition Jimmy was able to block and duck most of George’s attempts.  George was always able to finish off an opponent when he had them hurt.  He could always count on the old one two, but this time victory would not come.  Adding to his frustration the fans started chanting loudly “Jimmy Young, Jimmy Young.”  George wondered why the fans wouldn’t chant for him?  Jimmy recovered and for the rest of the fight was able to pile up points as George punched a lot of air.
When George was on that dressing room floor he had an encounter like never before.  He felt like he was in this empty place and that the Lord spoke to him.  The Lord said, “I don’t want your money, I want you.”  When he came to he was shouting “Jesus Christ is alive in me”.  George retired at the age of 27 and went into ministry full time.  He formed an independent church and lived each day for the Lord.  All of the bitterness that he had kept inside started to go away.  His heart was full of love as he forgave Ali and everyone else that had been on his hate list. 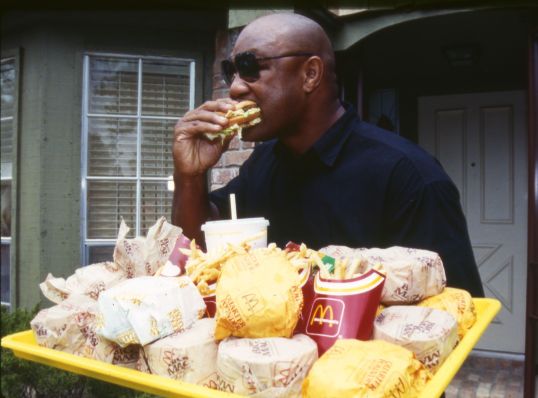 In 1987 George had a desire in his heart.  He had ballooned up to 315 pounds but the unmistakable desire was there.  He decided to get back into boxing.  He was old now in boxing terms at 38.  Yet it was almost like God had given him the desire to complete the work he had started.  George started winning boxing matches again.  He was big and slow but he still packed a wallop.  George trained hard and got his weight down to 250.  Although he wasn’t the fighter he was he became very popular wherever he fought.  In a drastic switch George was the fan favorite.  Because of his popularity fans wanted to see George fight for the heavyweight title.  Evander Holyfield had the title and gave George a fight.  George fought gallantly but it wasn’t to be.  Evander kept his title that night. 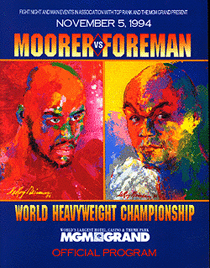 George persevered however and kept fighting.  At the age of 45 he was given another chance.  The boxing world scoffed at George.  He doesn’t deserve a chance they thought.  Michael Moorer was the Heavyweight champion.  He was a week short of his 27th birthday while George was 45.  It looked like an easy payday for Moorer as he was much quicker than the slow moving Foreman.  The bout played out that way too.  Through the first nine rounds Moore was able to use his speed to beat George consistently to the punch.  He was winning handily on all cards as the 10th round started.  Then out of the blue George connected and connected again.  Michael Moorer went down and was counted out.  George walked slowly back to his corner and landed on his knees.  In front of the whole boxing world he was giving thanks to his God for completing a chapter in his destiny! 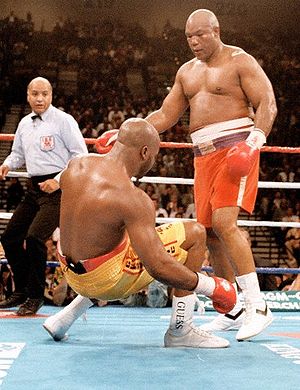 When you see George Foreman today there is always a smile on his face.  There is joy in his heart where there used to be hate.  It is hard to believe he is the same person.  He has been very successful in business after leaving the ring.  He has been a spokesman for the George Foreman grill for years.  You have seen him no doubt on commercials and his joy is contagious.  He made 200 million dollars from Salton Inc. to use his name to promote the grill.  That was substantially more than he ever made in boxing.  In looking back George is quick to acknowledge that his defeats were the best things to ever happen to him.  “I needed to suffer those defeats so I could hit  bottom and look up”, George stated.    He also adds some advice that we all can use.  “Just take one step at a time, trusting that God still has a plan for you, and he will make the best of your situation.” 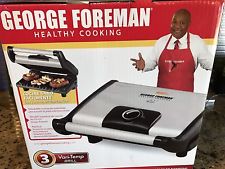 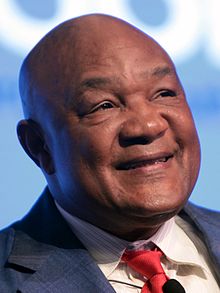 Posted in A Short Trip To Hell, An Interrupted Life, Christianity and Sports

2 thoughts on “Victory Beyond The Old One Two”