It was a crazy idea and yet very intriguing.  ABC Sports started it in 1973 and the competition had me glued to my TV set.  Dick Button the famous figure skater in the late 40’s and early 50’s came up with the idea.  Button won the Sullivan Award in 1949 as the best amateur athlete of the year yet he admitted that he was a terrible athlete.  The idea was developed in his mind over many years.  It would be a competition to see who really was the best athlete.  His idea was to take athletes from many different sports and have them compete against each other.  The thought was to have them do battle in things that were not related to their sport.  Baseball players could not participate in the baseball hitting contest, golfers could not enter the golf competition and so on.  At the end of the competition a Superstars winner for that year would be determined and the money that went with it.  Along the way contestants were rewarded for placing in contests with cash prizes too.  The last event which usually determined the winner was called the obstacle course.

I can picture it in my head how the obstacles were arranged.  First there was a giant brick wall and a rope and somehow they had to get themselves over the wall.  Then there was a cement tubular tunnel they had to run through.  After that they had to push a blocking sled about10 yards  before getting their feet in 10 tires that were lined up in 2 sides of 5.  After that they had to jump over a water obstacle and then do a high jump onto a padded landing bed.  Next was 2 hurdles they had to jump over before they reached the finish line.  If any of the obstacles were missed in any way the judges would raise a penalty flag and 5 seconds was added to their time for each obstacle not completed properly.

Over the years I have seen many athletes that were in the running for the top prize lose it on the obstacle course.  They might have had trouble pushing the sled or maybe they missed a tire.  There were times when everything was going so smoothly until they failed to clear the high jump and knocked the bar down.  Each obstacle had it’s own difficulties and contestants seemed to do some better than others.  Someone might be strong on the blocking sled but had trouble with the tires.  Others might have trouble with the high jump or the wall.

The obstacle course was the final event and culminated the worthiness of the person being named that years Superstar.  The first competition in 1973 the obstacle course was not an event.  1974 was the first year for the course.  It was a culmination event that made the contestants earn their prize.  Instead of one skill which all of the other ones were this event covered a multitude of skills that had to be performed one after the other.

Bob Seagren was a pole vaulter in the 1968 and 1972 Olympics.  Bob never won any money doing his sport because to keep his amateur status he couldn’t.  Winning money in the Superstars was different.  He did not lose his amateur status because he wasn’t competing in his sport.  It could be argued that Bob more than any of the other athletes in that first competition was hungry for that prize money.  It made sense, Bob was not rich like many of the other competitors were.  He was the only amateur in the field.  The prize money increased his desire because he had not been lavished with big earnings.  Bob won the 1973 event and accumulated $39,700 in winnings!  In 1974 Bob came in second place to an athlete that nobody had heard of named Kyle Rote (an American  soccer player).  It was the first running of the dreaded obstacle course and Bob won it capturing the 10 points for first place.  Through the years Bob totaled more than $206,000.00 competing in the Superstars.  After his first victory he and his wife were able to buy a house that would have been way out of their price range just a few months earlier. 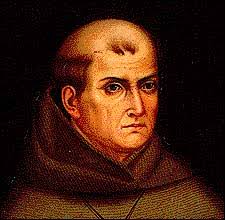 Saint Junipero Serra was an 18th century priest who founded the first nine Spanish missions in the state of California.  He came from Spain into the new world because he had a desire in his heart that God had placed there.  It was a desire to spread God’s love in this new place.  His life motto was “Keep Moving Forward.” With God’s help Serra was able to accomplish a legacy that is still alive today.  It is a legacy of not only what he did but the continuing faith that still lives on!  Saint Serra had many obstacles in his way but his keep moving forward philosophy kept him on the path God desired for him.  Saint Serra’s motto is a good philosophy for all of us.  When things get in our way trust God and keep moving forward.

Life is a lot like that obstacle course.  There are always things in the way threatening to block our dream.  I always noticed in the midst of the competition that the competitors kept their eyes straight ahead.  They attempted to the best of their abilities to successfully complete the obstacle before them.   After they did  they went straight to the next obstacle on the course.  They didn’t skip any obstacle in their path. They were determined to go from point A to point B no matter what was in their way!

Like Bob Seagren we need to be hungry for success, not for our own glory but to glorify God!   Are we going to let one of the obstacles in our path get in the way of our goal?  That would be the equivalent of would be winners of the Superstars event losing at the last minute because of an obstacle in their way.  The apostle Paul said it well in I Corinthians 9:24.  “Do you not know that in a race all the runners run, but only one gets the prize?  Run in such a way to get the prize.”

So how do we win the prize?  How do we keep moving forward when multiple obstacles are stacked against us daily? How do we keep our faith in a world of chaos and despair?  How do we proceed with our vision that God has given to us and never quit or get weary?  Relying on our faith and the spirit within us and not on our sight puts us past the obstacles and over the finish line!  Hebrews 11:1 states that “Now faith is the assurance of things hoped for, the conviction of things not seen.” So we fix our eyes not on what is seen, but on what is unseen, since what is seen is temporary, but what is unseen is eternal”,  II Corinthians 4:18.  Proverbs 3 verses 5 and 6 makes how we should be advancing forward very clear.  It comes from our knowledge of how we get true victory. “Trust in the Lord with all your heart and do not lean on your own understanding.  In all your ways acknowledge him and he will make straight your paths.”

One thought on “The Obstacle Course”